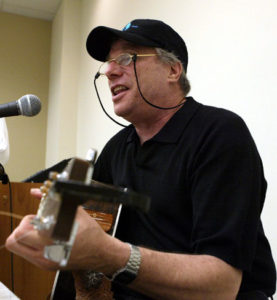 Congregation Or Ami’s Cantor, Doug Cotler, is a Grammy Award-winning composer and an accomplished singer, songwriter and musician. Blessed with a warm and expressive voice, Doug’s sensitive and penetrating interpretations of liturgy as well as his insightful and humorous songs about Jewish events and heroes have placed him in the forefront of contemporary Jewish music. He and his wife, Gail, have two sons.

When asked how and why he became a Cantor, Doug responded:
“Like so many others, my grandmother’s first step in America was on Ellis Island. It was 1905. She was 15. She had left her parents in Russia, in a shelter just outside Slutsk, now a major industrial city, but then a small community not too far from Minsk and Pinsk. When I was a boy, these were just funny sounding names. The hardships and pogroms that had driven my grandmother’s family out of their homes were rarely mentioned. She was strong, hard-working, resourceful, and as a mother, totally dedicated to her family. She carried within her an embrace of Judaism that was directly out of Sholom Aleichem. I have always seen her as one of Tevye’s daughters. In her later years, she lived in her daughter’s home, and each Shabbat she would light the candles in a softly whispered ritual that was a private, reverent moment for her. Three grandsons, of which I am the youngest, usually ricocheting loudly from baseball diamond to refrigerator as sundown approached, would see the shawl on her head and instantly go silent and motionless. Her hands would circle in the air above the candles, and then cover her face as she recited the Shabbat blessing. After the special dinner she had prepared was eaten, we would all go to temple. 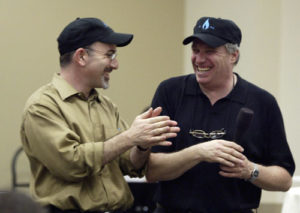 My father was the Cantor. My grandmother loved him. We all did. He was my inspiration. As I listened to my father stretching the notes and pulling the emotion out of every prayer, I remember thinking it remarkable that my grandmother knew them all by heart. These days, however, most congregants repeat them word for word-usually with little understanding of what they really mean. But I’m not criticizing. Ritual is supposed to get you in the mood, to center you, to get your mind off the world outside. As a sweet singer of Israel, I try to help the worshipers do that, to lead them through the words and into the heart and spirit of what the ritual is all about. I learned that if I embrace Judaism as my grandmother did, it will envelop and protect me just as she enveloped and protected it. She lit those candles every week. For me, a boy growing up as one of the only Jews in a small farming town in California, she kept the flame alive.”

You can get more information on Cantor Cotler’s music at www.dougcotler.com and  you can contact him via e-mail at DougCotler@aol.com.