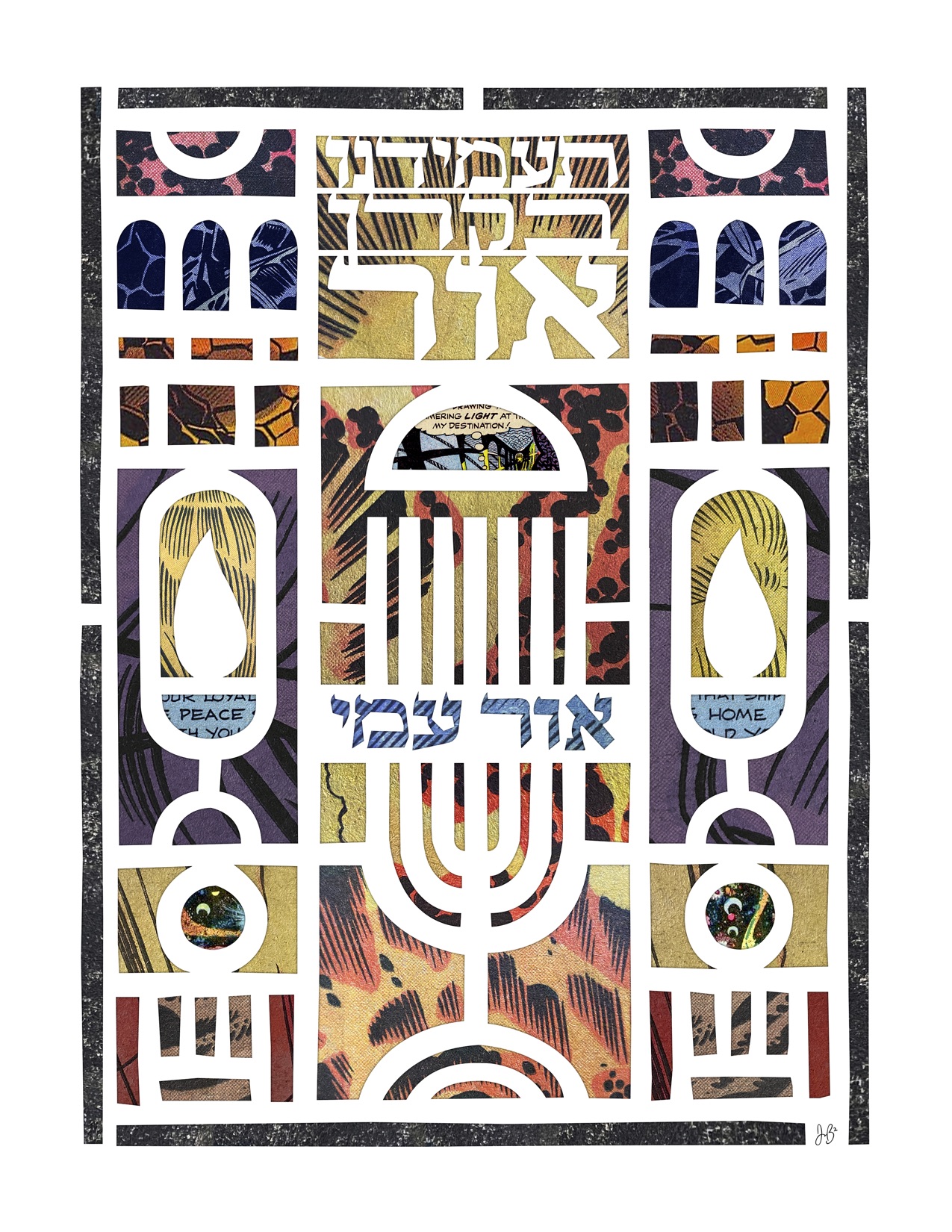 How do we transform our home worship place into a holy space?

Historically, many synagogues and even homes had a decorative work on the wall called a Shiviti, taken from the first Hebrew word of the verse, “I always set Adonai before me” (Psalm 16:8). This verse was typically written out in large letters and embellished with other devotional verses that formed decorative shapes, sometimes written in micrography (tiny letters). Hanging this devotional piece of Judaic art can turn our work space into a worship space; by displaying this artwork before or behind when on-screen, can remind you that holiness is always with and before you.

We have taken inspiration from this tradition to commission a shiviti from artist and congregant Isaac Brynjegard-Bialikas a gift to you.

I created the “Keren Ami Shiviti” for Congregation Or Ami in 2020 in advance of the 5781 New Year. The traditional shiviti (שויתי) dates back to the 18th century, as a way to contemplate the Divine. For this reason the shiviti often includes the four-letter name of God (or a variation thereof) and a representation of the Temple menorah. Shiviti is the first word of Psalm 16:8, and means “I have placed” — as in, “I have placed Adonai always before me.”

The “Keren Ami Shiviti” is structured around a verse from Talmud Berakhot 17A, which teaches that Rabbi Alexander would close all his prayers asking God to “place us in a ray of light,” which is the verse at the top, above the menorah: “אורה קרןְב ידנוִמֲעַתֶש” — “sheTa-amideinu b’keren orah” — from which this shiviti takes its name, which translates to “Ray [of Light] of our People”; the verse is a nod to the light in Or Ami (which can be found within the Talmud verse and also explicitly within the bar across the menorah).

All of my work incorporates cut-up comics, illuminating parallels between comic book mythologies and Jewish tradition to delve into the stories that make us human — and inspire us to be heroes and mensches. The comic book industry was started by Jews in the mid-20th century and is filled with stories and characters that are inspired by Torah. The comics used in this shiviti feature mystical heroes like Dr. Strange, inspiring heroes like Captain America and Wonder Woman, and Jewish heroes like The Thing (a member of the Fantastic Four, who has had a bar mitzvah and a Jewish wedding). The piece also includes textures drawn by legendary Jewish comic book artist Jack Kirby, and comic book speech bubbles with the words “light,” “home” and “peace” — as well as numerous abstractions of the Hebrew letter “shin” — short for “Shadai” (another name of God) and a reminder of the Divine, always before us.

It was an honor and a pleasure to create this shiviti for Congregation Or Ami, my family’s synagogue home; I hope it is an inspiration to our community in the same way that Or Ami is a light of inspiration for me and my family.