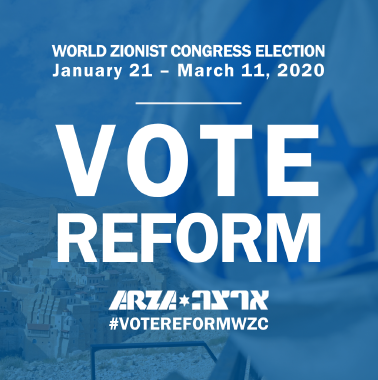 Did you already vote? CLICK HERE to let us know!

The World Zionist Congress Election is now open!
This is our only chance to have our voices heard in Israel…

Voting in the election is a 3-step process that should take about 5-7 minutes of your time. You will receive two different verification codes/PINs during the voting process to ensure election security.

Step #1: Register to vote and pay a $7.50 fee via credit card. This fee helps to cover the cost of the election.

Step #2: You will receive a PIN via Email/Text Message which along with your registered email address will give you access to your ballot. Please make sure to select Slate #2 “VOTE REFORM”

Important Step #3 after you vote: Please let us know that you voted. IT IS CRUCIAL TO LET US KNOW because the Reform movement is counting on Congregation Or Ami for 400+ votes! Once you have completed voting, please return to this page and…

CLICK HERE to let us know that you voted!

WHY YOU SHOULD VOTE:

Your vote will enable our Reform Movement to engage as real partners in Israel’s development as a nation. Our success in the World Zionist Congress elections will mean that we have significant influence in Israel’s national institutions.

Everything You Need to Know About the 2020 World Zionist Congress Election: Click Here for FAQ’s

This is a critical time for our Reform Movement and an opportunity for you to have a significant role in strengthening the future of Reform Judaism in Israel. Your vote in the World Zionist Organizations can make a difference.

Vote for our Reform Movement, our values, and our Israel.

Every five years the Jewish world conducts elections to the World Zionist Organization (WZO). The WZO is the parliament of the Jewish people and a representative body in Israel to determine the allocation of funds by the Jewish Agency for Israel. Strength in this parliament translates into influence – and funding — on issues affecting Jews in Israel and worldwide. Your vote gives you a voice on issues like religious pluralism, peace, and democracy in Israel and strengthens our Reform Movement in Israel.

What does this mean for the Reform Movement? Victory in the election will help support Reform Judaism in Israel to: Give Reform Jews a strong voice in critical decisions in Israel. Support the Israel Movement for Progressive and Reform Judaism with close to $5 million dollars in annual funding. Train Israel’s next generation of Reform rabbis. Support the important social justice and religious pluralism work of the Israel Religious Action Center.