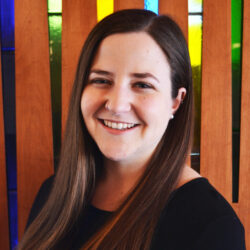 Yael Farber is a rabbinical and education student at Hebrew Union College – Jewish Institute of Religion.

Originally from Westchester, NY, Yael’s passion for Jewish community stems from more than two decades spent at URJ Eisner Camp. Yael graduated from Dickinson College with a BA in Religion and Judaic Studies and a minor in Women’s & Gender Studies. She spent a semester abroad in Prague, studying Czech Jewish history and immersing herself in the local Jewish community.

Prior to rabbinical school, Yael worked as the Director of Youth Engagement & Informal Education at Community Synagogue of Rye, NY and URJ CLASP Fellow for the URJ Northeast Camps. Yael has worked in communities across New York, Western Massachusetts, Central Pennsylvania, and Northern California.

Yael is thrilled to be a part of the Or Ami community as the Retreat Coordinator. She hopes to share her love of immersive Jewish experiences with participants of all ages by connecting with one another, creating sacred space, and having fun!

Yael can usually be found showing off pictures of her adorable rescue pup, Ariyeh, and drinking iced coffee or Diet Coke.